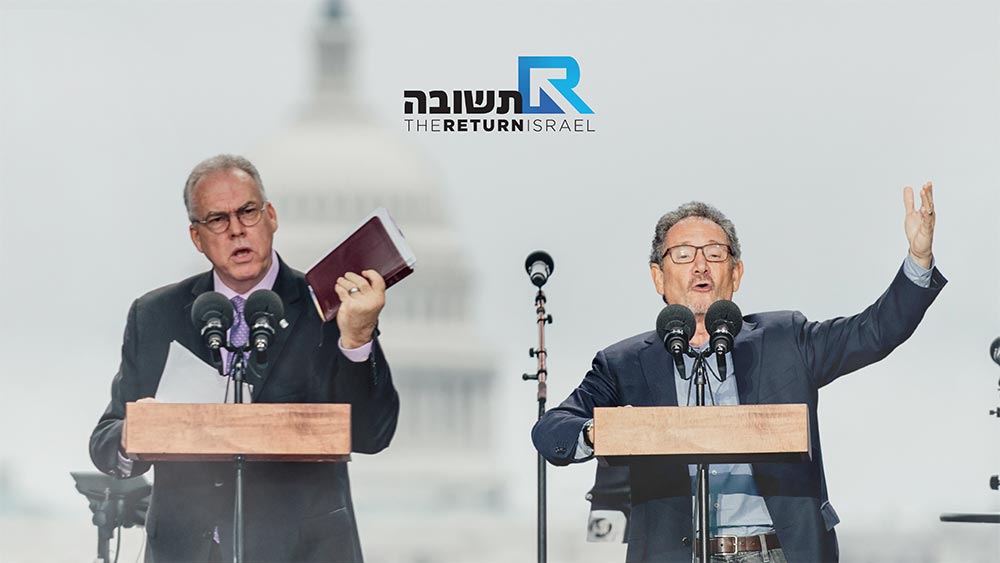 2000 years ago the Holy Spirit was poured out upon 120 Jews in Jerusalem during the Feast of Shavuot (Pentecost). The Body of Messiah was born in a blaze of Holy Fire!

That Jewish revival spread from Jerusalem, ultimately consuming both Jew and Gentile culminating with these historic words of a Jewish Rabbi, the Apostle Paul:

Therefore remember that at one time you Gentiles in the flesh, called “the uncircumcision” by what is called the circumcision, which is made in the flesh by hands— remember that you were at that time separated from Christ, alienated from the commonwealth of Israel and strangers to the covenants of promise, having no hope and without God in the world. But now in Christ Jesus you who once were far off have been brought near by the blood of Christ.

For he himself is our peace, who has made us both one and has broken down in his flesh the dividing wall of hostility by abolishing the law of commandments expressed in ordinances, that he might create in himself one new man in place of the two, so making peace, and might reconcile us both to God in one body through the cross, thereby killing the hostility. And he came and preached peace to you who were far off and peace to those who were near. For through him we both have access in one Spirit to the Father.

So then you are no longer strangers and aliens, but you are fellow citizens with the saints and members of the household of God, built on the foundation of the apostles and prophets, Christ Jesus himself being the cornerstone, in whom the whole structure, being joined together, grows into a holy temple in the Lord. In him you also are being built together into a dwelling place for God by the Spirit. Ephesians 2:11-22.

Celebrate with us today as that same revival has continued to the ends of the earth returning back to Israel where both Jewish and Gentile believers are gathering together all across the land to worship as ONE NEW MAN in the Messiah Yeshua (Jesus)! 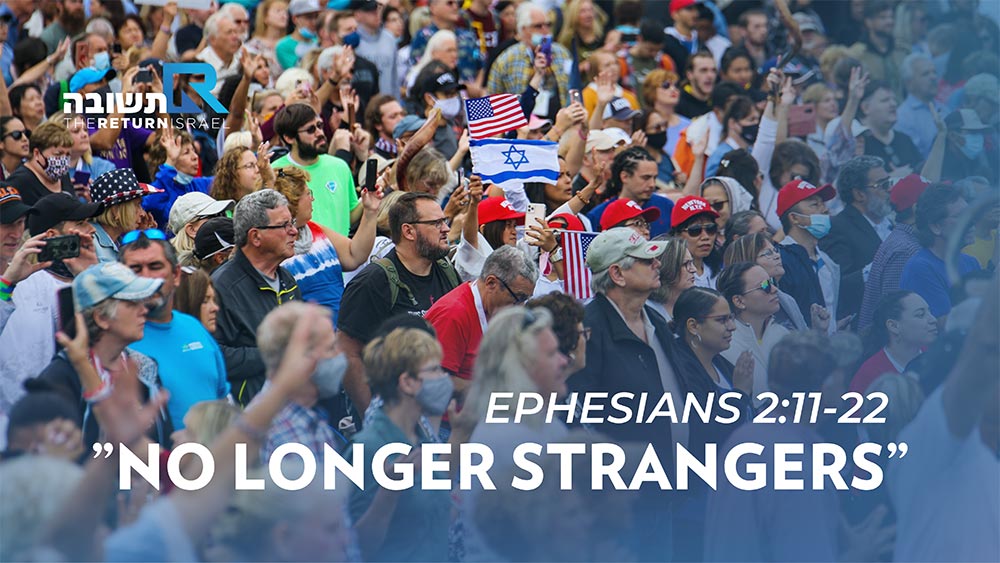 In Ephesians 2:11-13 Paul begins to show the association of the Jews and Gentiles in Christ. In Paul’s time, Jews who were in covenant with God viewed Gentiles as uncircumcised pagans and heathen without any covenant with God. The Jews believed the Gentile s had no link with natural Israel and were lost and hopeless (v. 12). Now, through Christ’s blood, all people, both Jew and Gentile, can have access to God through Christ (v. 13).

In Ephesians 2:14 At the Temple in Jerusalem stood a wall, a man-made barrier that separated much of the sacred Temple buildings from the court of the Gentiles. Actually, Gentiles were permitted only in certain areas and had specific restrictions placed upon them, preventing them from entering into the holy place. Years ago, an archeologist in Jerusalem discovered an inscription from the second Temple that read, “No foreigner may enter within the barricade that which surrounds the sanctuary and enclosure. Anyone who is caught doing so will have himself to blame for his ensuing death.” Christ broke down this wall of separation allowing Jews and Gentiles to enter God’s presence through Christ. Some people believed that Paul took his Gentile friends and crossed this wall at the Temple, causing a riot; subsequently Paul was attacked by Jews who threatened to kill him (see Acts21:28-31). Christ’s death tore down this wall of partition.

In Ephesians 2:15 The Law brought judgement and condemnation to the sinner. Christ’s suffering brought both Jews and Gentiles under His authority as “one new man.” Today, both Jewish and Gentile believers are believers in Messiah and are brothers and sisters of faith. This “new man” can reveal to the world the true peace that comes through Christ’s redemptive covenant.

In Ephesians 2:16-18 There were two enmities: one between God and the sinner and the other, written here, between Jews and Gentiles. The word reconcile means “to bring together again.” All spiritual barriers have now been removed. Any sinner can be reconciled to God, having made peace through the Cross. Jews and Gentiles in Messiah are reconciled, becoming “one new man” (v. 15) by the Spirit.

In Ephesians 2:19-20 Gentiles are no longer strangers, but now are part of the household of faith. The cornerstone is Christ (see Ps. 118:22; Isa. 8:14), as the cornerstone binds the entire building together. The foundation is the instruction and teaching of the apostles. The Greek word for foreigner means “to make one’s home alongside of” and refers to one who lives in a certain land but has no citizenship. Gentiles were foreigners, but now have been given citizenship in God’s family through Christ.

In Ephesians 2:21-22 Paul uses an architectural metaphor as he speaks of how a building must be joined together so the joints properly fit. The Greek word for temple here is naos (the inner sanctuary), and not hieros (the outward Temple with its porches and other outer buildings). Believers who are joined together create an inner sanctuary where Christ’s presence can work. 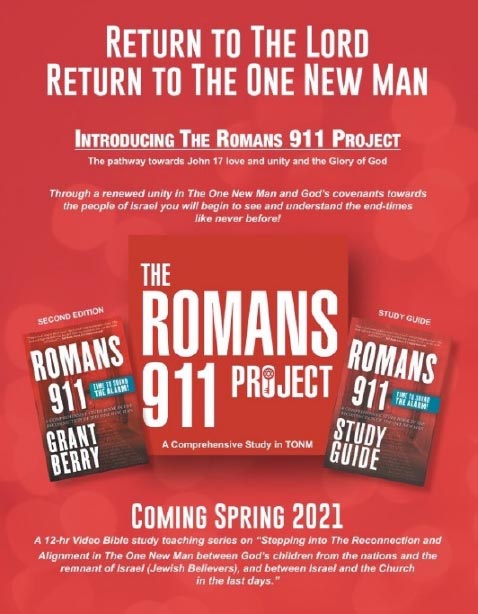 An Introduction from Kevin Jessip for The Romans 911 Project

Last year during the 10 Days of Awe, we held “The Return” event in Washington D.C. It was a prayer focused event on the great need for repentance in the United States, as well as for the world. And specifically for the Church to come into a deeper place of prayer. The Return was watched by tens of millions from around the world.

We believe those prayers are being answered and that God is responding but not maybe quite the way we have thought. This is because the end-time revival and awakening will not come to us how other revivals have been sent from heaven in the past now that Israel’s awakening is upon us. While we always want to glean from the past, God is moving His Body into the Restoration of all things, and it will require a different approach both to be able to recognize it and fully embrace it.

For this reason, restoration needs to take place first in the body of Messiah/Christ for God’s family to be reunited to one another in love and unity to fulfill Yeshua/Jesus’s prayer in John 17. And specifically, between Jewish and Gentile believers, and then with every race and tongue that they may be One New Man in Messiah/Christ.

In Grant Berry’s second book, “The Ezekiel Generation.” He tells the story of his first-born son’s birth, where God released a prophetic vision to him that put him on this Restoration path. That message was not for that time as it has been hidden in the mystery of the fullness of the Gentiles and Israel’s spiritual awakening that the apostle Paul speaks to us about in Romans chapter 11. 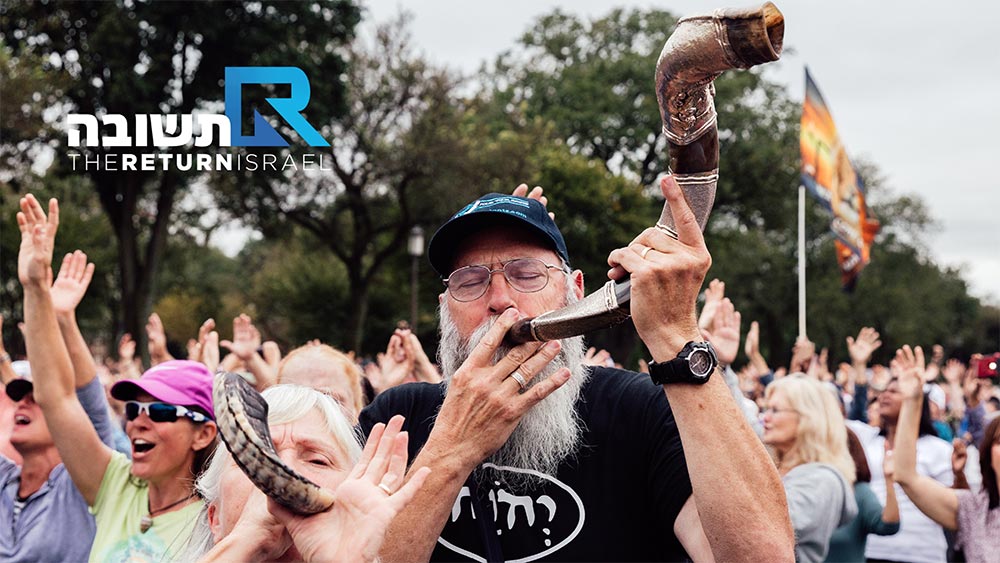 Grant has also been hidden in this mystery message; as one of God’s watchmen, he has carried this burden of restoration for most of his believing life. Through his own experience as an Intercessor the Lord has embedded this message of reconciliation in the family of God deep down in his spirit. And it is now the time for it to be released. We believe it is one of the answers and responses to many of our cries for repentance. Before the Father can release the fullness of glory upon us, we need to be restored to one another and move into this reconciliation.

Grant calls this message “The Reconnection”, which is fully laid out in The Romans 911 Project, a comprehensive study book, and a Study Guide written in tandem with a 12-14 hr. video teaching series.

The Romans Project has been produced to help us navigate this Reconnection message, and it leads us into an essential Realignment with Israel’s remnant (Jewish believers) as coheirs together in Messiah/Christ. The Romans 911 Project will not only help you better understand the significance of this message, but it will also help you, your Church, or your Congregation fully embrace it.

These are the steps for us to cross now that will draw us ever closer to the last great awakening. They will help mobilize God’s remnant to stand in the gap to awaken the Ekklesia/Church to come into its greatest role to help rebirth Israel, the last harvest of souls, and the Lord’s return. These are the end-time battles for the body of Messiah/Christ. The Romans 911 Project has end-time consequences for us all!

With great pleasure and joy, we introduce this project to you through these study guide teachings.

With love in Yeshua/Jesus,
Kevin Jessip as a One New Man representative for the Kingdom of God